The Buildings of ArtSci 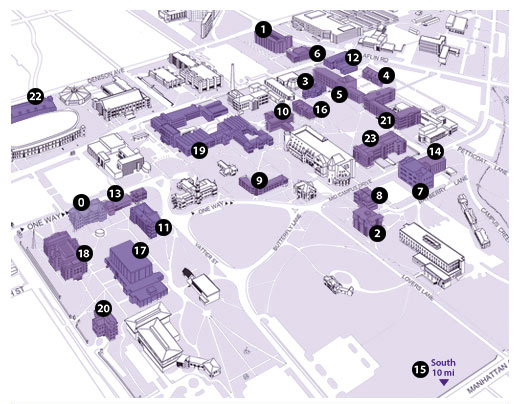 Calvin Hall is named in honor of Henrietta Willard Calvin, one of the nation's leading home economists of her time. Calvin was an early graduate of Kansas State Agricultural College in domestic science in 1886, and was a professor of domestic science. The College of Arts and Sciences made Calvin hall its home in early 2017, along with the Departments of History and Political Science, as well as the Pre-Health Professions, Open Option, and Security Studies programs. Advising services for Social Science, Humanities, Medical Laboratory Science, and Physical Science are also housed in Calvin Hall

Ackert Hall was erected in 1970 on the old R.O.T.C. drill field. This large structure contains the administrative offices, laboratories, classrooms, and lecture rooms of the Division of Biology. It also houses an electron microscope laboratory. Chalmers Hall, which is home to the Johnson Cancer Research Center, was completed in November 2002 as an addition to Ackert Hall.

Bluemont Hall, completed in 1981, was named after the original Bluemont College. It's the home for the Department of Psychological Sciences, complete with offices and advanced research laboratories. It also houses the College of Education.

In front of Bluemont Hall stands the Bluemont Bell. Older than all of the buildings on campus, the Bluemont Bell was cast and donated to Bluemont College by Joseph Ingalls in 1861. According to documents from the University archives, Bluemont Central College, originally located one mile west of K-State Campus was in need of a bell to call the students to class. Ingalls provided the $175 for the bell and shipping in exchange for having his name engraved on the side. The bell now stands in front of Bluemont Hall, a part of the rich K-State heritage.

Burt Hall was designed in 1923 and originally provided facilities for clinical research, instruction and surgery on large animals as a veterinary clinic. This building was named in honor of Dr. Burt who was Head of the Department of Anatomy for many years. He joined the faculty in 1909 and served the Department of Veterinary Medicine for 37 years. The building was remodeled in 1946 following a fire, renovated again in 1959, and partially upgraded in 1981. It is currently used for biochemistry research facilities.

Bushnell Hall was finished in 1949 and named after Dr. Leland D. Bushnell, the Head of the Department of Bacteriology starting in 1912. It houses offices and research labs for the Division of Biology

Cardwell Hall is home to the Mathematics and Physics departments in the College of Arts & Sciences. It is also home to the James R. McDonald Laboratory, which houses a Tandem van de Graff accelerator, and atomic supercoducting linear accelerator and an EBIS source of highly ionized atoms, together with equipment for studying atomic collisions. A fully equipped planetarium permits students to view the location and movement of celestial bodies during various seasons. An astronomical observatory is located on the roof.

This facility was built to upgrade chemistry and biochemistry research, teaching and library services. This facility is Phase I of a projected plan to upgrade research. Phase II, planned to contain classrooms, offices and additional library space is scheduled to be completed at a later date.

Dickens Hall was established in 1908 and used by the Department of Horticulture, Botany, and Plant Pathology. The building used to have greenhouses in the back, but they were demolished to make room for the Chemistry/Biochemistry building. Currently, the Departments of Philosophy and Statistics occupy the building.

Home to the modern languages department, this building was named for Dr. Milton Eisenhower, the ninth president of Kansas State University. Dr. Eisenhower was the only president of this university who was also an alumnus. The faculty of the Department of Architecture and Allied Arts completed the design and contract drawings under the direction of the State Architect.

Fairchild Hall was built in 1894 for a "Library and Agricultural Science Hall." The Library was located in Fairchild until Farrell Library was built. Fairchild currently has office space for the School of Music, Theatre, and Dance, as well as Student Financial Aid, Planning and Evaluation Services, the Center for Aging, and computer labs.

Constructed in 1943, the military science building was the only project completed on campus during World War II. It is now home to the Aerospace Studies (Air Force ROTC) and Military Science (Army ROTC) programs at K-State.

The hall is named for Gen. Richard B. Myers, current President of Kansas State University. Myers is a 1965 K-State graduate who completed the Air Force ROTC program and who eventually served as chairman of the Joint Chiefs of Staff. He served from 2001-2005 as the principal military adviser to Secretary of Defense Donald Rumsfeld, President George W. Bush and the National Security Council.

Prior to his appointment as chairman, Myers served as vice chairman and assistant to the chairman. He retired from the Air Force in 2005 after holding various leadership positions and commanding Air Force operations in the United States and abroad. Myers was Inaugurated as President of K-State on April 28, 2017.

Kedzie Hall became the first building in the United States designed primarily for home economics when it was built in 1899. The art department resided on the second floor, domestic science on the first floor, and a cafeteria in the basement. At present, the A.Q. Miller School of Media and Communication and the Collegian Media Group are operating out of Kedzie.

The Konza Prairie Biological Station (KPBS) is located on a 3,487 hectare native tallgrass prairie preserve jointly owned by The Nature Conservancy and Kansas State University. The KPBS is located in the Flint Hills of northeastern Kansas, a grassland region of steep-slopes overlain by shallow limestone soils unsuitable for cultivation.

The Flint Hills region encompasses over 1.6 million hectares extending throughout much of eastern Kansas from near the Kansas-Nebraska border south into northeastern Oklahoma, and contains the largest remaining area of unplowed tallgrass prairie in North America. Hence, the vast majority of Konza Prairie, and the surrounding landscape, has not been plowed and retains its native characteristics.

KPBS is operated as a field research station by the K-State Division of Biology. The station is dedicated to a three-fold mission of long-term ecological research, education, and prairie conservation. It is a unique outdoor laboratory that provides opportunities for the study of tallgrass prairie ecosystems and for basic biological research on a wide range of taxa and processes. The station is open to scientists and students from throughout the world.

Currently the home to Gender, Women, and Sexuality Studies and American Ethnic Studies, Leasure Hall was completed in 1908 and originally designed to provide facilities for Veterinary Medicine and the Department of Bacteriology.

McCain Auditorium was flexibly designed in 1970 with unique acoustic features and adjustible seating facilities. The ceiling of the auditorium can be lowered to cut off the balcony, reducing the seating from 1800 to 900. A three story addition to the east provides instructional, rehearsal, storage rooms and administrative offices for the School of Music, Theatre, and Dance. In the basement there is a seismograph for the Department of Geology.

Originally a gym, Nichols Hall is now home to the A.Q. Miller School of Media and Communication as well as the Mark Chapman Theatre (formerly Nichols Theatre), and is used by the School of Music, Theatre, and Dance.

At the beginning of the twentieth century it was common practice to design buildings used by ROTC, as Nichols was, to resemble a medieval fortress. Called "The Castle," Nichols burned in the 1960's and was beautifully rebuilt in 1985. The mural in the lobby is dedicated to the students who worked to preserve the building.

Nichols was once the home of KSAC, K-State's public radio station (now KSDB, housed in the Student Union). The radio towers (1924) to the west are national historical monuments.

This is the oldest building on campus and until Throckmorton was expanded, it was also the largest. Seaton Hall is home to the Department of Geography. Seaton is also home to the College of Architecture, Planning and Design.

This building was originally built for instruction in institutional management. A cafeteria and tea room were included on the second floor. The semicircular arched windows, low pitched hipped roof, and details of the colonnaded entrances were inspired by villas of the Italian Renaissance Classrooms. Laboratories and faculty offices of the Department of Geology are now located in this building.

Currently, the Departments of Sociology, Anthropology and Social Work, and Economics call Waters home. Also housed in Waters are the non-ArtSci departments of Agriculture Economics, Agronomy, Entomology, and Horticulture and Forestry.

The west side of Memorial Stadium underwent a renovation in 2014 and is the new home for the School of Music, Theatre, and Dance's Purple Masque Theatre. The Purple Masque Theatre is currently used for drama therapy, workshops, playwrights' stage, acting recitals, scene rehearsals, Ebony Theatre performances and final scenes for the Principles of Directing course.

Memorial Stadium was the first memorial on campus and was dedicated in 1929. Identical plaques commemorating veterans are located on the south ends of both West Stadium and East Stadium.

Plans for the stadium began in 1922, when university leaders wanted to build an architectural shrine to honor fallen veterans. They decided that a stadium was a dignified structure which would be useful to the college and community. The west wing was completed in 1922 and the east wing was completed in 1924. The enclosing walls were added in 1928 and the locker rooms and offices were built in 1938.

Currently the home of the Department of Art, the building underwent reconstruction and received a new name following a fire at the old Denison Hall in 1934. The name honors Dr. J.T. Willard, who served K-State in several capacities, including acting president for two months following the resignation of H.J. Waters in 1917.