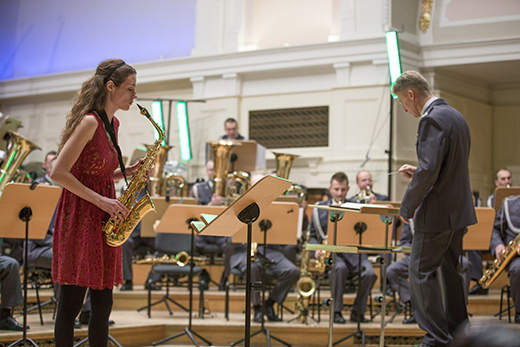 Anna Marie Wytko has performed in Poland, France and Costa Rica, but her future goals involve not only performing, but mostly helping the students she teaches.

Wytko, Assistant Professor of Saxophone in the School of Music, Theatre, and Dance, recently returned from Costa Rica, where she was invited to be a guest soloist with the San Jose Wind Symphony and also taught several classes, working with students from around the world. She said although it was the first time she had met the students, there was already that bond of making music.

“The great thing about music is it’s a common universal language that anyone can relate to on any level,” Wytko said.

Wytko’s experiences in Poland and France also involved guest teaching and performing. While in Poland, she got the opportunity to perform a concerto with the Polish Air Force Wind Symphony.

Wytko’s father is a professional saxophonist as well and a huge reason she made music a part of her life. Wytko said she grew up hearing her father perform and being around great saxophone performances. Her parents exposed her to all styles of music and types of instruments, and there was a period of time when Wytko was very passionate about the piano and even considered it being her focus. In the end though, she chose saxophone for its endless expression capabilities.

Wytko studied at the University of Minnesota, and while in her second year of her master’s degree, heard about an opening at K-State and applied knowing the music school’s terrific reputation. From her first visit, she loved the beautiful campus and seeing the respect and pride people take in the campus. Wytko said she loves the energy she feels when walking through the university, sensing that people are excited about achieving their goals.

“I’m very lucky to be a part of an institution where people take pride in what they do,” Wytko said. “There’s a sense of doing something meaningful.”

Since arriving at K-State, Wytko has balanced both performing and teaching, but she says she easily sees them as intertwined.

“I value how both your teaching and performing careers make you a more thoughtful musician and role model,” Wytko said.

By traveling to perform and guest teach, she said it allows her to expose students to new ways of teaching. One of the many things Wytko said she loves about her work is getting to create curriculums and pedagogies that fit individual students’ needs. It is both a luxury and responsibility in applied studio instruction, she says.

“My ultimate goal is to see students become their own best teachers so they take ownership of their learning,” Wytko said.

In her performing career, Wytko said some short-term goals include the world premier recordings project that she is preparing to release, as well as continuing to record as a solo and chamber artist. She also recently received an invitation to perform and teach in Uruguay and in Argentina in August.

While she has a list of personal goals, Wytko said many of her goals are involved with teaching. She looks to continue to expand not only the undergraduate program at K-State, but also the graduate program. She also wants to increase the competition experiences that students can participate in, as well as further expand her students’ knowledge of meaningful repertoire, both of saxophone music and beyond. Wytko feels traveling will help her share different pedagogical approaches with her students, so she looks to continue travelling so she can engage with other educators and musicians from around the world.

Although she has traveled the world, Wytko believes there is nothing more rewarding than knowing she can help an individual achieve success and happiness in his or her career path. She said she has seen her students achieve a lot of success in careers in both music and other fields. Wytko said she likes working with students even if they aren’t interested in a career of music.

“The best part is seeing students succeed in whatever they do,” Wytko said. “That inspires me to be my own best teacher.”