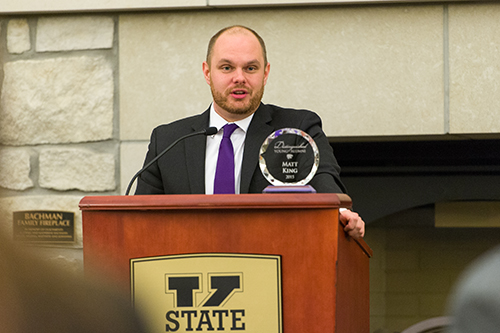 The College of Arts & Sciences at K-State has a long history of alumni who have distinguished themselves in their careers. After being selected to receive the 2015 Distinguished Young Alumni award by the K-State Alumni Association, ArtSci alumnus Matt King can add his name to that list.

King graduated from K-State in 2007 with degrees in political science and natural resources and environmental sciences and is currently a fund analyst for the World Bank Group. He says his family and his college helped him pave the way to find success after college.

Early in life, King’s mother first sparked his interest in politics. She was a community activist and ran for office when King was 12 or 13.

“My mom was so passionate in what she was doing trying to help her neighbors out that I wanted to do that, which is why I got into political science,” King said.

It wasn’t until he added natural resources and environment sciences as a secondary major that he realized he wanted to go into environmental economics.

“So it wasn’t just politics but it was environmental policy, and how you incorporate the private sector and free market to achieving environmental goals.”

King had multiple jobs before starting work as a fund analyst for the World Bank Group in 2013. As a fund analyst, he helps manage two funds that invest in projects to deliver renewable energy and energy access to the world’s poorest countries. He credited the College of Arts & Sciences to broadening his educational background and improving his communication across different groups.

“No matter what I’ve done, whether start a business or work at the World Bank, it involves teamwork and it involves getting everybody on your team on the same page to accomplish a shared goal,” King said. “You learn that stuff by taking classes in math, literature, economics and political science and meeting people with different backgrounds with different ways of communicating with different expertise. You get that from the multi-disciplinary nature of what the college offers.”

While King doesn’t know what his future holds, he does know he wants to continue to make a difference in his work.

“I think my number one goal is to continue to feel like I’m having an impact with what I spend most of my waking hours doing,” King said. “It needs to be constantly changing. It needs to be fast-paced. I need to feel like I’m challenged. So if that’s at the World Bank, great. If that’s elsewhere, great. I love what I’m doing and I love the people I work with.”