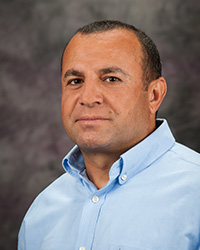 Sabri Ciftci has been appointed the Michael W. Suleiman Chair in Arab and Arab-American Studies in the College of Arts & Sciences' Department of Political Science at Kansas State University.

With a tradition of success in the study of Arab and Arab-American issues at K-State, the Suleiman Chair was established to help the university remain at the forefront of Middle Eastern studies. The Suleiman Chair and the activities that will be associated with it, including talks and workshops, will help to expand knowledge on issues that are currently significant and will remain relevant in the coming years.

“I am truly honored to hold this title,” Ciftci said. “Michael W. Suleiman has been a pioneer in Arab studies. Building on his legacy, I believe we can advance the study of Middle East in the Department of Political Science and at Kansas State University. Activities associated with the Michael W. Suleiman chair will help to build an intellectually vibrant community on campus and they fit well with K-State’s vision to be among the top 50 public research universities by 2025.”

Ciftci is an associate professor in the Department of Political Science. He came to K-State after receiving his Ph.D. in political science from Florida State University in 2008 and specializes in Middle Eastern politics and public opinion. His most recent scholarship examines Islam and democracy, Arab public opinion, civic engagement in the Arab world and anti-Americanism in the Middle East. Ciftci has published widely in leading journals including Comparative Political Studies, Political Research Quarterly, International Journal of Middle East Studies and Foreign Policy Analysis. He teaches courses in Middle East politics, political Islam, comparative politics and advanced research methods.

“Professor Ciftci is the kind of academic leader that we want to recognize with the Suleiman Chair,” said Peter Dorhout, dean of the College of Arts & Sciences. “Through his teaching and research, he has enabled our students to understand and appreciate people and cultures outside their ken, and broadened their perspectives.”

To honor his legacy and strengthen the study of Arab, Arab-American, and Middle Eastern issues at K-State, John Hofmeister, former President of Shell Oil and founder and CEO of the non-profit citizens for Affordable Energy, made a lead gift in 2005 to establish the Suleiman Chair and was instrumental in initiating support from Shell Oil. Hofmeister is a K-State College of Arts & Sciences alumnus, graduating with a bachelor’s degree in political science in 1971 and a master’s degree in political science in 1973, and received an honorary doctorate from K-State in 2014.

“We are thrilled that Dr. Cifti has been awarded the Suleiman Chair,” said Jeffrey Pickering, head of the Department of Political Science. “His scholarship has appeared in the foremost journals in Middle Eastern studies and political science, and is on the cutting edge of knowledge in the area. I am confident that Dr. Ciftci’s ongoing research and the activities he has planned for the chair will enhance K-State’s reputation in this area even further.”