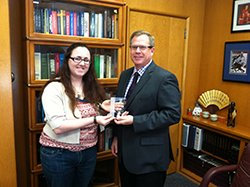 Catherine Strayhall, junior in English, won the Sullivan Poetry Award presented by the College of Arts & Sciences with her poem “The Air Was Heavy and the Days Were Long.”

“It’s really exciting because I really wanted to do well last year and it just didn’t work out,” Strayhall said. “But,I felt really good about this specific poem. It’s just a long shot that you don’t really think it’s going to happen. So when you find out it does, you don’t really believe it.”

Strayhall originally wrote the poem for her Intro to Poetry class while working on abecedarian poems, a type of poem in which each line begins with the first letter of the alphabet and is followed by the successive letter until the final letter is reached. She wrote part of it in class and later revised it for her final portfolio before turning it in. Her goal was to capture the spirit of summer.

“I was really happy with the way it came together,” Strayhall said.

Strayhall has entered numerous writing contests and has been published in a literary arts magazine for teens ages 12-20 at the Johnson County Library for the past six years. She says that she’s learned that everybody can write if they practice it.

“It’s a way for everybody to express their voice,” Strayhall said. “There are a lot of people who will support you in that, more than you would think.”

This was the second year the College of Arts & Sciences offered the Sullivan Poetry Award to K-State students. There were 34 entries in the contest and the winning prize was $2,000.

"The Sullivan Award is supported through a gift by an alumnus who, while not a formal writer himself, enjoys writing poetry and supporting students who do as well," said Peter Dorhout, dean of the College of Arts & Sciences. "We are able to celebrate the many creative accomplishments of our students in A&S through generous alumni and friends like Mr. Sullivan."

The Air Was Heavy and the Days Were Long

A child in summer understands the meaning of life:

Barefoot, playing hide and seek til the sun goes down,
Crickets sounding in the darkness,
Dust caking her feet; she smiles and
Eats marmalade on toast in the mornings,
Feeling the freedom in an empty day.

Gazing at the crumpled clouds from the top of a hill,
Her hands restlessly pick at the hem of her shirt where the thread’s coming undone.
In the shade of trees she reads well-worn books
July days passing with the turning pages.

Kansas girl feels the air crackle as
Lightning splinters the black ceramic sky.
Miles away from home, as the day becomes
Night, she doesn’t flinch at the thunder.
Over tangled roots she races, through
Pouring rain and seas of mud.

Quiet comes to her mind;
Revisiting the sunset in her memories,
Singing to herself as the shadows stretch out across the ground,
Then turning toward the sky, staring
Upwards at pinprick stars and planets.

Venus is on her mind, unreachable
When her eyes slip closed—
Except in her dreams, she can grab the flickering, fiery stardust,
Yesteryear’s light sparking as she
Zips a handful in her jacket pocket.