By Stephanie Jacques
From K-State Today 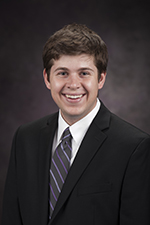 A College of Arts & Sciences student at Kansas State University student Ross Allen, a senior in economics and philosophy and a minor in nonprofit leadership studies, has advanced to the final round of the 2015 Rhodes Scholarship competition.

Allen, Soldier, will interview Saturday, Nov. 22, in St. Louis, Missouri, with other finalists from Arkansas, Iowa, Kansas, Missouri and Tennessee. Winners will be announced after interviews are complete.

Rhodes scholarships are awarded to 32 students from the United States each year and provide full funding for one or two years of study at Oxford University in England. Winners are selected for outstanding academic achievement, commitment to others and leadership potential.

"I feel so honored to be given this opportunity," Allen said. "It's really remarkable how much support the K-State community continues to show me. Without it, I can honestly say I'd be nowhere near this point in life."

Allen is co-director of events and outreach for Blue Key Senior Honor Society, president of Acacia fraternity, vice president and student program coordinator of HandsOn Kansas State, and member of the Non-Profit Leadership Student Alliance, Student Alumni Board, Economics Club and Philosophy Club. He was the student affairs director for the Student Governing Association; president of Silver Key, the sophomore honorary; vice president of Chimes, the junior honorary; and class leader for the Mary Lynn and Warren Staley School of Leadership Studies.

To learn more about competing for future Rhodes Scholarships or other scholarships while a student at Kansas State University, contact Jim Hohenbary at jimlth@k-state.edu.