Shakespeare’s Heartbeat in the Little Apple 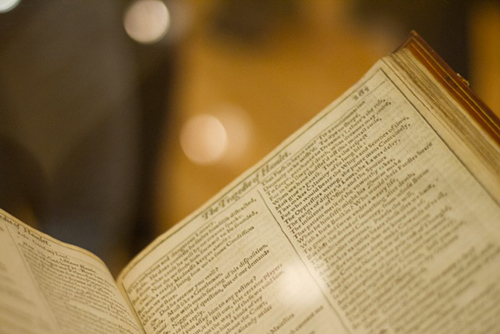 “De-Dum-De-Dum-De-Dum,” Claire Redcliffe pantomimes the beating of a heart to Don Hedrick’s Shakespeare students. “Shakespeare is a heartbeat,” the London actress explains. Later during the class, she would direct the students in producing a scene from A Midsummer Night’s Dream—to charming results.

Claire was just one of the five professional actors visiting Kansas State University last week from England. As part of the Actors From The London Stage program, she and her fellow thespians enjoyed a weeklong residence on campus that included classroom visits and attending various Shakespeare events around Manhattan. Of course, all of this culminated on February 5 in their hilarious and wonderful stage performance of Shakespeare’s A Midsummers Night’s Dream to a packed house at McCain Auditorium.

The actors, and their performances, are just one example of the events happening around K-State and Manhattan, celebrating the arrival of Shakespeare’s First Folio at the Marianna Kistler Beach Museum of Art, which is part of a national tour commemorating his work and marking the 400th anniversary of his death.

Printed in 1623 by John Heminges and Henry Condell, friends and actors in Shakespeare's company, the Folio was the first successful attempt to collect and publish the Bard's plays. Without this book, the world would be missing 18 Shakespeare plays including some of his most famous: The Tempest, The Taming of the Shrew, and As You Like It.

“The important thing about the Folio is, of course, that it is the book that gave us Shakespeare,” said Rebecca Rowe, a docent for the First Folio Exhibit.
“We have wonderful Shakespeare scholars here and students who want to learn more, so what better to inspire them more than the book itself?”

While the Folio may be the crown jewel of K-State and Manhattan’s “Shakespeare in the Little Apple” event series Linda Duke, Director of the Beach Museum of Art noted the monumental effort put into organizing the Folio’s arrival and the entire month worth of events while addressing a crowd of more than 260 during the Folio’s opening reception.

“The Shakespeare Folio is the result of hard work by an awful lot of people, and a lot of campus and community collaboration,” said Duke.

This hard work, and collaborative effort, has truly paid off in the best way possible for K-State and the Manhattan community. The quality and range of Shakespeare events throughout February are a testament to a job well done by the various entities working on this project. The quality and care taken with crafting the month long celebration is clear, especially when considering that one of the major aims of the exhibit is to have something for everyone.

“This is something people should talk about, not just people in literature and English,” said Hedrick, professor of English and project director for the Folio. “It prevents us from being compartmentalized and thinking only about what we get when we get out of here. We brought together people from the community, the Library, the arts center, the high school,”

The outcome of all of this work, that has been years in the making—the application process to have the Folio visit took two years, and the application itself was 119 pages—can be enjoyed until February 28th when the Folio will leave the Beach Museum and continue its national tour. During these final weeks of the month, attend one of the various events and feel Shakespeare’s heartbeat resonate throughout the Little Apple, and remember there is more to see than just a really old book.

“The Shakespeare in the Little Apple events cover a wide range of topics--from Lincoln to dancing to jazz--so there's a little something for everyone to enjoy,” said Rebecca Rowe. “Find something that you like and come on out!”