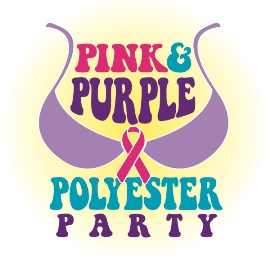 Got a favorite fringed macramé vest? A perfect pair of white, patent-leather, platform boots? It’s time to dig them out, because the Pink and Purple Polyester Party is coming to Manhattan this April. The party, in addition to being a fun time, is one of several community fundraisers that supports K-State’s Johnson Cancer Research Center.

The tradition began in late 2010, when Dave Lewis, K-State’s own football and men’s basketball public address announcer and member of the Johnson Cancer Research Center’s advisory board, threw the first Pink and Purple Polyester Party as a celebration of the life of his late wife Elena.

“I lost my wife to breast cancer in January 2006, and since then I’ve taken on an active interest in making sure that this disease claims its final victim,” says Lewis. “I hope for the day when no mother, no wife, no child, no sister, no friend shall ever have to worry about breast cancer.”

Despite the party’s personal origins, it soon grew into a fun community project and fundraiser.

“This was a way Dave felt he could make a difference without being a scientist,” Marcia Locke, the Communications and Outreach Coordinator of Johnson Cancer Research Center explains. “His skill is throwing a party—he has a DJ business and he emcees parties and weddings—and he loves Manhattan. The party is a big Manhattan event.”

While the party has changed over the years, the fun hasn’t. Originally, Lewis just wanted to throw a retro dance party and have a good time for a good cause.

“I’ve been performing as a DJ since 1979, and I always wanted to have this big disco dance party,” says Lewis. “I think it’s the most fun party music.”

In the first two years, Lewis’s company provided the music and entertainment. But as the party grew larger, Lewis realized he needed help and drew on the community for their expertise. While Lewis still emcees the event, music is provided by the popular Kansas City area 70’s cover band, Disco Dick and the Mirrorballs, whose videos on their website implore us to shake our booties while they play the funky music. J&C Imaging’s photo booth filled with silly props, from mustaches-on-a-stick to elf hats, is a popular distraction. There’s a cash bar and a silent auction offering restaurant gift cards, spa packages, K-State sports memorabilia and other items donated by local businesses.

Of course, a seventies themed party wouldn’t be complete without a costume contest.

“A really fun aspect of this party is dressing up,” Locke says. “People go all out: 70’s costumes, polyester leisure suits and velvet jackets, tie-dye and bell-bottoms. This year they’re giving a cash prize of $100 for the best costume.”

The costume contest is Lewis’s favorite part of the event as well, but his hosting duties interfere with his ability to participate. However, he does wear a spectacularly purple, pink-trimmed polyester suit he had custom made for the event.

“The suit is special,” Lewis jokes. “I only wear it for the party.”

Last year’s party introduced the Off the Hook bra art contest, a tradition that will continue this year. Originally conceived by Rock Creek High School senior BrookeLynn Minihan as part of her senior project, the contest invites local businesses to decorate a bra in any manner they choose and party guests to vote for their favorite with dollars. The bras are modeled at the party by male models.

“They were fully clothed in solid black so the blinged-out bras were visible and it wasn’t offensive—just light-hearted fun for a good cause, and the guys did such a good job. They made it fun, and partiers even stuffed more dollars in the bras” says Locke.

All profits from the party are donated to the Johnson Cancer Research Center, which provides funding for cancer research at K-State. The center provides seed money so researchers can build the data required to apply for large national grants. One of the exciting cancer research projects at K-State involves chemistry professor Stefan Bossmann, and anatomy and physiology professor Deryl Troyer. Together, they developed a diagnostic test for breast and lung cancer that measures the enzyme activity in blood or urine. The test is non-invasive and allows the cancer to be detected earlier than symptoms would usually allow—and results are available in an hour or less.

“They’re testing it in China right now,” says Locke. “Eventually, this could be part of a wellness exam.”

“We’ve helped put 50 undergraduates a year into the laboratories of our affiliated faculty members, who serve as mentors. We give each student $1,000, and the professors also receive $1,000 to offset research costs,” Locke says.

The party will be held 7 p.m. Friday, April 10, at Houston Street Ballroom, 427 Houston St. Information about tickets can be found here.