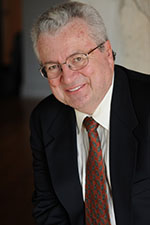 John Hofmeister, founder and CEO of Citizens for Affordable Energy and former president of Shell Oil Co., will be honored at commencement for the university's Graduate School. The ceremony starts at 1 p.m. Friday, May 16, in Bramlage Coliseum. Hofmeister also will serve as the commencement speaker for the Graduate School ceremony, and then as the speaker for the College of Arts and Sciences ceremony at 8:30 a.m. Saturday, May 17, in Bramlage.

The awarding of the honorary doctorate follows the approval by the Kansas Board of Regents. It is one of the highest honors the university can give.

"Kansas State University is honoring John Hofmeister for his distinguished career, particularly as one of the nation's foremost leaders on energy issues," said Kirk Schulz, Kansas State University president. "He also demonstrates how degrees from K-State can help one become a leader not only in the boardroom but also on issues of major importance facing our country today, such as energy security. Our alumni are a true strength of this university and are important to our goal of becoming a Top 50 public research university by 2025."

Hofmeister earned a bachelor's degree in 1971 and a master's in 1973, both in political science, from Kansas State University. Before joining Shell Oil Co. in 1997, he served in executive leadership positions at General Electric, Nortel and AlliedSignal for more than 35 years. He was named president of the oil company in 2005. Among his initiatives at Shell was launching an extensive outreach program to discuss critical global energy challenges. The national program included an 18-month, 50-city engagement effort, during which Hofmeister led 250 Shell leaders in meeting with more than 15,000 business, community and civic leaders, policymakers and academics to discuss how to ensure affordable, available energy for the future.

After retiring from the company in 2008, he founded the nonprofit Citizens for Affordable Energy. The Washington, D.C.-based public policy education firm promotes U.S. energy security solutions, including a range of affordable energy supplies, efficiency improvement, essential infrastructure, sustainable environmental policies and public education on energy issues. He continues to lead the organization today.

The author of the book "Why We Hate the Oil Companies: Straight Talk from an Energy Insider," Hofmeister is a key member of the U.S. Energy Security Council. The bipartisan group includes former Secretary of State George Shultz and two former secretaries of defense, William Perry and Harold Brown, as well as three former national security advisers, a former CIA director, two former senators, a Nobel laureate, a former Federal Reserve chairman and several Fortune 50 CEOs.

Hofmeister serves as chairman of the National Urban League and is the current chair of the U.S. Department of Energy's Hydrogen and Fuel Cell Technical Advisory Committee. He also serves on the boards of Sodexo Business, the Foreign Policy Association, Strategic Partners LLC, the Gas Technology Institute and the Center for Houston's Future. He is a fellow of the National Academy of Human Resources. He also is a past chairman and serves as a director of the Greater Houston Partnership.

Along with an honorary doctorate, Hofmeister's university honors include serving as the 2006 alumni fellow for the College of Arts and Sciences and delivering the 145th Landon Lecture in fall 2006. The lecture series is the university's most prestigious and features the top leaders and policymakers in the world.