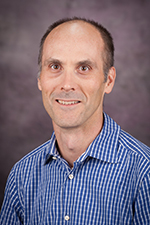 Derek Hillard has been selected to serve as the interim department head for the department of modern languages in the College of Arts & Sciences at Kansas State University.

"The modern languages department is fortunate to have many good leaders on the faculty," said Peter Dorhout, dean of the College of Arts & Sciences. "Derek is an enthusiastic leader who has a great vision for how to continue progress on the strategic plan developed last year."

Hillard came to the K-State modern languages department in 2002 as an assistant professor of German, before becoming an associate professor in 2008. During his time at K-State, Hillard has taught courses in German language, literature, and culture, German and European Studies, and advanced undergraduate and graduate seminars.

Hillard earned a bachelors degree in Germanics from the University of Washington, which included one year as a student at the Universität Tübingen in Germany. He went on to earn a masters and Ph.D in Germanic Studies from Indiana University in 1995 and 2001, respectively.

“It is an honor to serve as interim head of the department of modern languages and I am grateful for the opportunity,” Hillard said. “I look forward to working with the university community to successfully meet our challenges and achieve the goals of the department.”

Hillard replaces Salvador Oropesa, who will be a professor of Spanish and the department chair of languages at Clemson University and who had served as K-State’s modern languages department head since June 2012.

"Dr. Hillard brings solid research, teaching and service to the department, firm roots in the community and a great sense of humor,” said Oropesa. “He will be a terrific head."

“The department of modern languages enjoys the privileged position of translating for the campus community the world's linguistic and literary heritage,” Hillard said. “With outstanding, award-winning teaching and research in literature, linguistics, foreign languages, cultures, arts, and the history of ideas in their original languages, it plays an indispensible role in educating students and imparting the skills that they need.”

For more information about the department of modern languages, visit http://www.k-state.edu/mlangs.