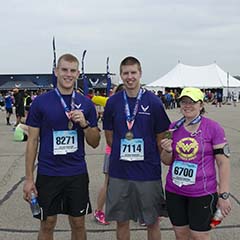 On Sept. 20, a group of students and faculty members from the Air Force ROTC program in the College of Arts & Sciences at Kansas State University competed in the 13th annual Air Force Marathon in Dayton, Ohio.

Two faulty members and four Air Force ROTC cadets from Detachment 270 Wildcat Warriors made the trip to participate in various events including a half-marathon and 5k.

The Air Force Marathon started in 1997 as a celebration of 50 years of the Air Force. Every year it's on the third Saturday in September. Approximately 15,000 people participated in the 2014 race.

Cadet Carl Minnix, senior in history, competed in the Air Force Marathon for the third time.

"I definitely have improved since my first year," Minnix said. "The second year, I ran the full marathon instead of the half, so it is a little hard to compare. Distance running is not only good for your body, but it is also a great stress relief."

Others to run the half-marathon were Cadet Dillon Jetton, sophomore in park management and conservation, and Captain Amanda Hatesohl, an AFROTC assistant professor who is a frequent runner, competing in several half-marathons and marathons.

Even though the marathon was the driving force behind Air Force ROTC going to the event, Minnix said that the running is just one element of what they do.

"The actual race is just a small portion of what we do. The leadership development aspect is much more important to me," Minnix said. "In the 13-hour van ride to Ohio, I was able to listen to two active duty officers discuss stories from their careers, and I learned leadership techniques through their experiences."

While in Dayton, the group also learned about Air Force heritage and military aviation at the Air Force Museum at Wright-Patterson Air Force Base.

"We were able to visit the Air Force museum and learn about the rich history of the Air Force. Then we toured a cutting-edge research laboratory where the technology used in future battlefields is being developed," Minnix said. "The marathon itself is fun, but the networking and mentorship opportunities dominate the trip."