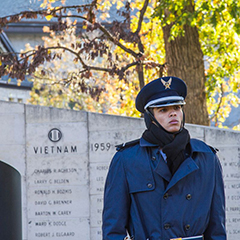 In a war that lasted nearly a decade, 58,000 Americans lost their lives or went missing, including 42 Kansas State University students.

2014 marked the 50th anniversary of America entering the Vietnam War in August 1964. To serve as a remembrance of the war and the students and soldiers that lost their lives, students at K-State launched a $22,000 fundraising campaign in 1986 to construct a memorial that would honor those lost in battle.

While August was technically the anniversary month of the war, the K-State Air Force ROTC wing in the College of Arts & Sciences combined the recognition of the anniversary with Veterans Day on Nov. 11.

Cadets in Air Force ROTC stood in shifts guarding the Vietnam Memorial on campus throughout a 24-hour silent vigil on Veterans Day. The cadets were completely in charge of implementing the vigil and coordinating their hourlong shifts.

"The cadet wing, which is composed of college students in the program plan, organize and staff this event," said Lt. Col. Shawnn Martin, commander of the Air Force ROTC Detachment and professor of aerospace studies. "They aren't directed to do this and have taken this on over many years as a sign of respect."

Even though most of the cadets aren't veterans themselves, they see it as their duty to honor those who had or are still fighting.

"We have a small number that were enlisted and a few that are currently members with the Guard or Reserves," Martin said. "Each is working toward a commission and the opportunity to serve their country in the future. They know that one day, the future generations will do the same for them in recognizing their future service."

For Carl Minnix, cadet and senior in history, the opportunity to stand at the vigil gave him time to reflect on all of the veterans that came before him and the sacrifices that they made.

"Even though most of us have never served in the military before, we are constantly learning from past and present service members," Minnix said. "Standing at the position of attention for an hour gives each guard the opportunity to reflect on the sacrifices endured by the men and women who came before us. Every year, I take away something different."

The K-State community was largely invested in Veterans Day by having a large military community and an Army post, Fort Riley, 20 miles from the K-State campus.

"K-State has a huge military community," Minnix said. "Veterans and their families are very important to our identity as a university. Every year, we get a lot of support from the K-State family during the Silent Guard. The event serves as a reminder of K-State's proud military heritage and sacrifice of time and comforts that military families make every day to support our freedoms."

Throughout the 24 hours, retiree veterans came to the memorial to reflect and to thank the cadets for honoring Veterans Day.