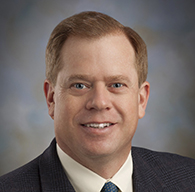 Peter Dorhout, dean of the College of Arts and Sciences and professor of chemistry at Kansas State University, has been selected as a 2013 American Chemical Society fellow and will be recognized at the society's upcoming fall national meeting in Indianapolis.

"This is an honor bestowed on members for their outstanding accomplishments in scientific research, education and public service," said Bassam Z. Shakhashiri, immediate past president of the American Chemical Society, or ACS, and host of the fall national meeting.

"Their individual contributions to ACS, to science, and to society are hallmarks of distinction in keeping with the society's mission of advancing the chemical enterprise and its practitioners for the benefit of Earth and its people," Shakhashiri said. "Selection as an ACS fellow greatly honors each individual and also honors ACS. It is also a charge to each fellow to maintain their excellence in advancing chemistry and serving society."

The purpose of the society's fellows program is to recognize and honor its members for their outstanding leadership and achievements in and contributions to the science and the profession, as well as their equally exemplary service to the society. Dorhout was recognized for his leadership of the College of Arts and Sciences at Kansas State University, the Graduate School at Colorado State University, his leadership in solid-state chemistry and his contributions to the American Chemical Society.

"It's a wonderful group to join," said Dorhout. "These are very distinguished chemists and chemical engineers who have made a difference in the discipline as well as in professional leadership. I'm honored to be among these great men and women in the ACS."

"One of the ways K-State will become a Top 50 public research university by 2025 is by having our faculty recognized as fellows in their academic societies," said Kirk Schulz, Kansas State University president. "The fact that the American Chemical Society has recognized Peter Dorhout's leadership as dean also elevates the renown of the College of Arts and Sciences."

"Peter's selection as an American Chemical Society fellow recognizes his distinguished accomplishments in solid-state chemistry research; his leadership both at Colorado State University and at Kansas State; and his extensive service to the profession at a national level," said Eric Maatta, head of Kansas State University's department of chemistry. "This recognition brings great credit to the chemistry department, the college and the university."