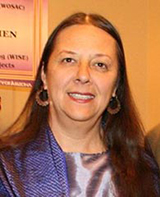 Yolanda Broyles-González has been selected to lead American ethnic studies in the College of Arts and Sciences at Kansas State University. In addition, she has been named university distinguished professor, a lifetime title that is the highest honor the university can bestow its faculty.

"Dr. Broyles-González is a leader in ethnic studies research and education," said Peter Dorhout, dean of the College of Arts and Sciences. "We are looking forward to having her help guide our program to its next level of scholarship. These are exciting times for students and faculty in American ethnic studies and Yolanda will be a wonderful addition to our community."

"Many very positive factors inform my decision to join Kansas State University," Broyles-González said. "Among the factors I find especially appealing are K-State's very positive work environment, the distinguished faculty, the administration’s strong commitment to excellence and diversity, the university's strong civic partnerships, and the appeal of the physical environment — the spectacular Konza Prairie, for example, at the intersection of two rivers."

Broyles-González studied at four German universities and was among the first women of color to receive a doctorate degree from Stanford University. As an undergraduate she attended the University of Arizona and graduated Phi Beta Kappa. She is a native of the Arizona/Sonora desert and a Yaqui Barrio Libre community elder.

The focal points of her research and teaching are popular culture, gender, oral tradition, Native American culture and the popular performance genres of the U.S.-Mexico borderlands, of which she is a native. Among her most recent publications is the first academic study of the legendary singer and National Medal of Arts recipient Lydia Mendoza, titled "Lydia Mendoza’s Life in Music/La Historia de Lydia Mendoza." Broyles-González also recently published the book "Earth Wisdom: A California Chumash Woman."

"Professor Broyles-González is absolutely amazing," said Spencer Wood, interim director of American ethnic studies. "She has decades of experience and a fantastic record of scholarship. Her administrative experience is equally impressive. She has initiated or led multiple programs related to American ethnic studies at several prestigious universities in her career. It is hard to imagine a more qualified candidate. In a word, professor Broyles-González is fantastic."

"I regard the commitment to strengthen American ethnic studies one expression of a strong overarching institutional commitment to intellectual and human inclusivity," Broyles-González said. "I greatly look forward to forming part of Kansas State University's visionary momentum."

Broyles-González is a recipient of the lifetime Distinguished Scholar Award from the National Association for Chicana and Chicano Studies. The award recognizes Broyles-González's multiple and invaluable scholarly contributions and her advocacy for the Chicana/o studies discipline. Other distinguished national and international awards have come from the National Endowment for the Humanities, the Ford Foundation, the Fulbright Foundation and the German Academic Exchange Service, which funded her research in Germany for five years.