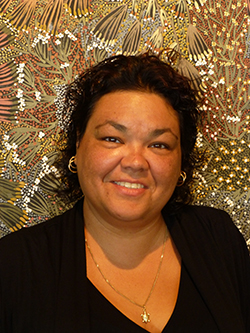 This event is free and open to the public

Michelle Deshong will present on her research, which focuses on the participation of Indigenous women in the formal political landscape of Australia, which has been fraught with many political and institutional barriers and challenges. Deshong has been undertaking Ph.D. research to identify key enablers to increase participation in public and political life. The presentation will provide insight into the findings of the research including black politics, public life and party politics. She will also share some preliminary insights from her Fulbright exchange with the Native Nations Institute at the University of Arizona, focusing on governance and First Nations building.

Michelle Deshong lives in Townsville, North Queensland and draws here connection to Kuku Yulanji nation. She has completed a BA with First Class Honours in Political Science and Indigenous studies and is working on her PhD (on the participation of Aboriginal women in public and political life) at James Cook University.

Michelle has worked in both the Government and NGO sectors, and has held many senior leadership roles. From 2001-2010 Michelle was the Director of the Australian Indigenous Leadership Centre and in 2001 she was awarded ACT Aboriginal Person of the year.  She currently holds a number of directorship roles in the Not for Profit sector. In 2013 Michelle was named in the Australian Financial Review/Westpac 100 Women of Influence Awards

Michelle has extensive experience in areas of leadership, governance and politics. She has a strong commitment to human rights and has also been an NGO representative on many occasions at the United Nations forums on the Commission on the Status of Women and Convention on the Elimination of Discrimination against Women. She has a strong background in gender equality and works to ensures that the voices of Indigenous women are represented at all levels.

Michelle is undertaking research in the USA and Canada in 2016 as part of her Fulbright scholarship to develop strategies for Nation building, leadership and gender equality. She was also named as the 2015 National NAIDOC Scholar of the Year.

Individuals wishing to visit with Ms. Deshong during her visit to K-State should contact Associate Dean Beth Montelone (bethmont@ksu.edu).