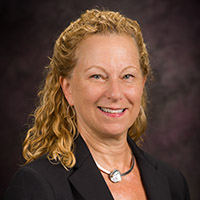 Dr. Wheatley is an Associate Professor of English and has served as Assistant Dean of Students in the College of Arts & Sciences since 2002.

In her role as Assistant Dean of Students, Wheatley is head of advising in the college, working closely with department heads and lead advisors, organizing two training sessions a year for departmental advisors, and supervising the 12 advisors in the Dean’s Office (Open Option, four interdisciplinary majors, Pre-Health, and the academic coordinator). She manages the academic concerns of more than 8,000 undergraduates, including academic difficulties, withdrawals, reinstatements, Academic Fresh Start and Forgiveness, SPARK, grade appeals, graduation and commencement, study abroad, and complex transfer issues.

Wheatley is the College representative on the Committee for Academic Policy and Procedure (CAPP). She is also the liaison between College of Arts & Sciences students and the Office of Student Life and is a member of the Critical Incident Response Team (CIRT), as well as the faculty sponsor for the College Council. In addition, she has oversight of recruitment events for the college including Open House, Orientation and Enrollment, and numerous university recruitment events.

A K-State English faculty member since 1986, Wheatley specializes in Modernist British Literature, in particular Joseph Conrad. She has published numerous articles on Conrad’s plays, his narrative style, and his career, and on modern drama in such journals as Conradiana, the Journal of Narrative Theory, and Mosaic: A Journal for the Interdisciplinary Study of Literature. Other interests include drama, ancient to modern.

In her career, she has served as the Head of English Undergraduate Studies and Advising, faculty advisor for the International English Honorary Society Sigma Tau Delta, and has chaired the Hallam Walker Davis Award Committee. She currently serves on the Provost’s Committee on Interdisciplinary Programs as well as the Provost’s Committee to Evaluate Athletic Academic Assistance Program.

Wheately received a B.A. in English from Barnard College at Columbia University before going on to earn a Master’s and Ph.D. in English from the University of Virginia. Her commitment and dedication to students was honored by the College of Arts & Sciences with the William L. Stamey Advising Award.